Is it really, truly summer yet? I honestly cannot tell. It’s the middle of June and all we’ve had here in Toronto lately is rain, wind and cold. So not ok. I want sun and I want warmer weather! It’s a big ask, I know. But I want what I want! In hopes of better weather, I’ve been super busy compiling a small list of summer reads. Yay! More books! Now I know in my 2019 Winter Booklist post I said that mysteries and psychological thrillers were my favourite kinds of books. And they totally are! But for the summer, I
prefer a few lighter, more effortless reads that don’t take a ton of thinking or theorizing. I want a bit more romance, comedy and catty, hilarious drama. Just something a touch different than what I usually reach for. You know, variety. It’s the spice of life (and books)!

So without further ado, here are the books I’ve chosen for my 2019 Summer Booklist!

First Son Alex Claremont-Diaz is the closest thing to a prince this side of the Atlantic. With his intrepid sister and the Veep’s genius granddaughter, they’re the White House Trio, a beautiful millennial marketing strategy for his mother, President Ellen Claremont. International socialite duties do have downsides—namely, when photos of a confrontation with his longtime nemesis Prince Henry at a royal wedding leak to the tabloids and threaten American/British relations.

The plan for damage control: staging a fake friendship between the First Son and the Prince. Alex is busy enough handling his mother’s bloodthirsty opponents and his own political ambitions without an uptight royal slowing him down. But beneath Henry’s Prince Charming veneer, there’s a soft-hearted eccentric with a dry sense of humor and more than one ghost haunting him.

As President Claremont kicks off her reelection bid, Alex finds himself hurtling into a secret relationship with Henry that could derail the campaign and upend two nations. And Henry throws everything into question for Alex, an impulsive, charming guy who thought he knew everything: What is worth the sacrifice? How do you do all the good you can do? And, most importantly, how will history remember you?

The One by John Marrs

A simple DNA test is all it takes. Just a quick mouth swab and soon you’ll be matched with your perfect partner—the one you’re genetically made for.

That’s the promise made by Match Your DNA. A decade ago, the company announced that they had found the gene that pairs each of us with our soul mate. Since then, millions of people around the world have been matched. But the discovery has its downsides: test results have led to the breakup of countless relationships and upended the traditional ideas of dating, romance and love.

Now five very different people have received the notification that they’ve been “Matched.” They’re each about to meet their one true love. But “happily ever after” isn’t guaranteed for everyone. Because even soul mates have secrets. And some are more shocking than others…

The Unhoneymooners by Christina Lauren

Olive is always unlucky: in her career, in love, in…well, everything. Her identical twin sister Ami, on the other hand, is probably the luckiest person in the world. Her meet-cute with her fiancé is something out of a romantic comedy (gag) and she’s managed to finance her entire wedding by winning a series of Internet contests (double gag). Worst of all, she’s forcing Olive to spend the day with her sworn enemy, Ethan, who just happens to be the best man.

Olive braces herself to get through 24 hours of wedding hell before she can return to her comfortable, unlucky life. But when the entire wedding party gets food poisoning from eating bad shellfish, the only people who aren’t affected are Olive and Ethan. And now there’s an all-expenses-paid honeymoon in Hawaii up for grabs.

Putting their mutual hatred aside for the sake of a free vacation, Olive and Ethan head for paradise, determined to avoid each other at all costs. But when Olive runs into her future boss, the little white lie she tells him is suddenly at risk to become a whole lot bigger. She and Ethan now have to pretend to be loving newlyweds, and her luck seems worse than ever. But the weird thing is that she doesn’t mind playing pretend. In fact, she feels kind of… lucky.

When childhood sweethearts Justine (Sagittarius and serious skeptic) and Nick (Aquarius and true believer) bump into each other as adults, a life-changing love affair seems inevitable. To Justine, anyway. Especially when she learns Nick is an astrological devotee, whose decisions are guided by the stars, and more specifically, by the horoscopes in his favorite magazine. The same magazine Justine happens to write for. As Nick continues to not fall headlong in love with her, Justine decides to take Nick’s horoscope, and Fate itself, into her own hands. But, of course, Nick is not the only Aquarius making important life choices according to what is written in the stars. 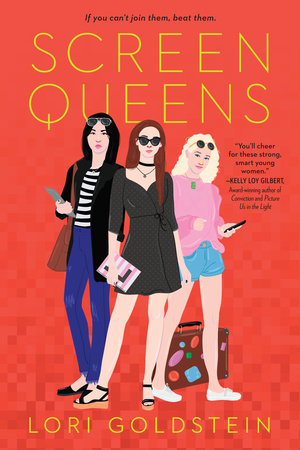 Three thousand applicants. An acceptance rate of two percent. A dream internship for the winning team. ValleyStart is the most prestigious high school tech incubator competition in the country. Lucy Katz, Maddie Li, and Delia Meyer have secured their spots. And they’ve come to win.

Lucy Katz was born and raised in Palo Alto, so tech, well, it runs in her blood. A social butterfly and CEO in-the-making, Lucy is ready to win and party.

East Coast designer, Maddie Li left her home and small business behind for a summer at ValleyStart. Maddie thinks she’s only there to bolster her graphic design portfolio, not to make friends.

Delia Meyer taught herself how to code on a hand-me-down computer in her tiny Midwestern town. Now, it’s time for the big leagues–ValleyStart–but super shy Delia isn’t sure if she can hack it (pun intended).

When the competition kicks off, Lucy, Maddie, and Delia realize just how challenging the next five weeks will be. As if there wasn’t enough pressure already, the girls learn that they would be the only all-female team to win ever. Add in one first love, a two-faced mentor, and an ex-boyfriend turned nemesis and things get…complicated.

Well, there it is! Five books I am super excited to read this summer! I’m already deep into Red, White & Royal Blue and really loving the witty writing style of Casey McQuiston. Alex as a character is truly hilarious to me and I can’t wait to read more of this book tonight. Have you read any of the books I’ve mentioned in this post? What do you have on your booklist this summer? Are you currently reading a book that you just can’t put down? I’m always looking for new recommendations, so let me know what you think I should try reading next!

Hi there! Welcome to my blog!

I like to talk about make-up like it’s magic, investigate skin care claims like a private eye, and sometimes fan girl about books, wedding planning and other lifestyle things. Visit my About page if you’d like to get to know me a bit more :)

Everyday is Valentine’s Day with you 😘❤️ #valentine #fiancee #nightin #hecookeddinner #lucky
Today it was my bridesmaids’ turn to “find the one” and my goodness was it a journey! Even with an overpacked store (no seriously, the fire marshal should investigate), a sales associate that kept taking off during our appointment, and a body slam incident with an employee, we managed to find a dress that looks stunning on all three ladies. I’m so lucky to have a team of strong, smart, hilarious, and beautiful women to stand with me on my wedding day. @brittsandie @ashpursuesjoy @niloufini thank you for enduring every second of the dumpster fire that was our bridesmaids appointment today ❤️
ROM date❤️ #rom #fridaynight #date #fun
Don’t ask how I did this with a bottle of wine in me 🍷 #gingerbreadhouse #familytime #wine #fun #christmas
%d bloggers like this: